Frankie Albano seems to be the international man of mystery in the tarot. Not a lot is known of him, and those who do know aren’t talking, but here are some fun facts to rouse the rabble until Mister Britannica comes along with some better answers. Most of what we know comes from bits and pieces of factual history strung together from different sources, allowing us to triangulate “most likely details.” That, and some wild speculation, which is always fun. So, in no particular order, and almost certainly to be updated and corrected as information comes in, here is what we know about Frank R. Albano.

First there is the matter of his name. Frankie released his tarot wheel in 1967 and his first deck in 1968, with others to follow shortly thereafter.  You can get more information on all of this from those links. But for some real fun we need to step back in time, just a few paces, to 1965. Frankie lived in Hollywood in 1967 and 1968 (and onward), so it is not a stretch to suggest that Frank R. (“call me Frankie”) Albano was the same “Frankie Albano who recorded two songs for Mike Curb and Tower Records (a subsidiary of Capitol) in 1965: IN HOLLYWOOD. The guitar player was the famous Davie Allan, king of the fuzz guitar. Davie was a session player (like Jimmy Page) in the 60’s and played with several musicians, lending his unique talents to many singles and albums. He also had his own band, Davie Allan & the Arrows. He is still alive and kicking so I wrote to him inquiring about Frankie (the singer) in case he could remember anything. Being that Frankie only pressed one single (and a B-side) this is a stretch, but it is worth trying. So I ended up buying the song to see if Frankie was as good at singing as he was assigning “metaphysically correct” colors to tarot cards. Here’s an update to that: Dave (he goes by Dave now, or DA, but his band is still called Davie Allan & the Arrows) told me that he only played on two tracks and never had any contact with him other than the session, but he turned me on to Becky Judd and John Nemoy (Curb secretary and lawyer), and gave me their contact info. So the Scobby Doo mystery is ongoing and Shaggy is on the job. 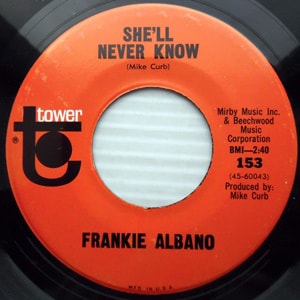 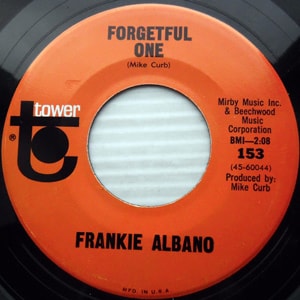 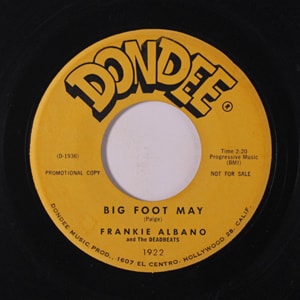 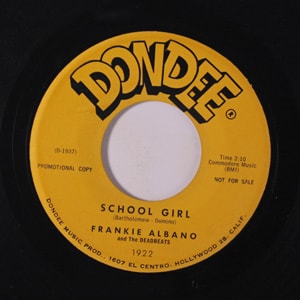 All of this leads us to the matter of the name. “Frankie Albano” released a recording in 1965 for Tower records, but “Frankie Albano and the Deadbeats” (and how cool is that for a band name?) released a promo single for Dondee records in 1936, even though the single was originally set down in 1922. As luck would have it, this was also in Hollywood. Growing up in Hollywood I have stomped past all of these locations, so this makes all kinds of sense in an experiential way. My question is whether Frankie was in fact the same person who was hanging with the deadbeats (now 30-40 years older), or a son, grandson, or one of those infamous industry tricks of Hollywood where names (and songs, and scripts, etc.) are recycled. Could our Frankie Albano be related in any way to the awesomely named Frankie Albano and the Deadbeats? You know that I had to get this 7″ single as well. If you stop by the research library* we might even fire up the ol’ Victrola and give this thing a spin. Perhaps we can Jitterbug (seriously—that is some crazy exercise) to a few peppy tunes.

* Always call first, and we actually have to find a “record player” at an antique store.

So, what’s the verdict on Frank R. Albano? We are still researching and will add fluff and fact when and whence they arrive. In the meantime, we have a small but nice collection of decks and wheels for you to examine.