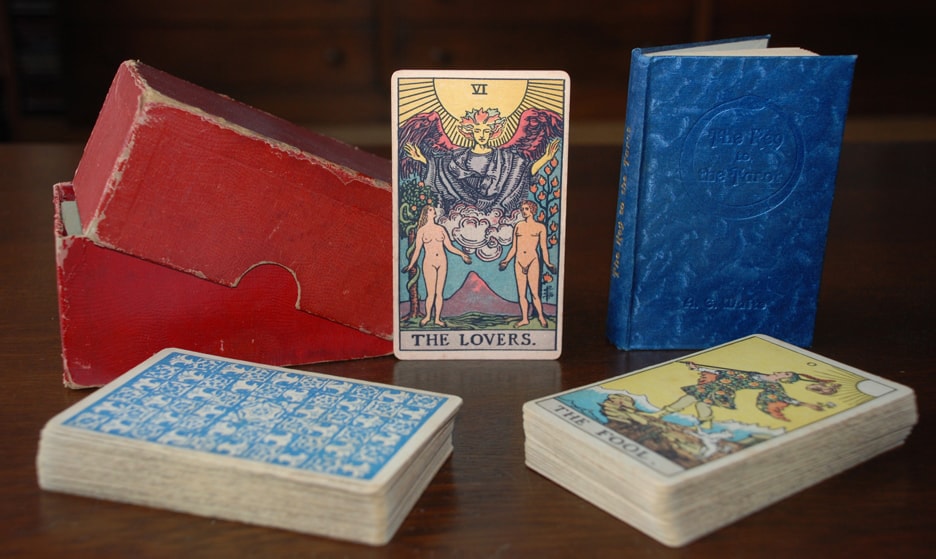 This prototype deck was officially presented to the public on December 10th, 1909 for display at a local arts & crafts fair. There is no existing documentation to state when the art for the deck was done except for a letter from Pam and a small ad for the upcoming Tarot of the Bohemians (ToB) in the October catalog from William Rider & Son, Ltd., which appeared in the back of certain books, but it is assumed that the art was conducted over a six month span throughout the summer and fall of 1909. Copies were available for order in the December issue of Ralph Shirley’s Occult Review, and pre-sales were possible by ordering directly from William Rider & Son, Ltd.’s October catalog. Given the complete lack of any evidence these decks actually existed (other than the few known copies and a letter of apology that accompanied one of the extant copies) it appears the actual number of the unnamed decks now termed “Roses and Lilies” was extremely limited. This is akin to “proof copies” of books made by publishers and these first decks may have been made primarily to establish early interest for a massive print run three months later (which is eerily similar to the fate of the Waite=J.K. Tarot 65 years later in Tokyo).

This deck initially sold for five shillings net (postage was fourpence) and came with or without a “Key to the Tarot” for an extra two schillings sixpence. (7-/6-). An odd note is that the October 1909 catalog had the deck and KtT listed at 6 shillings sixpence (6-/6), so if you missed the pre-order deadline it cost you extra*. To further complicate the matter, according to the early ads there appears to have been a paperback version of the Key to the Tarot (so, you had a choice) which this lower price represents. That version disappears from future ads, and no known copies of that version exist today.

* Yes folks, only here can you find such nerdy statistics and details carefully woven into the narrative.

This edition of the deck (December 1909–February 1910) came with a small blue hardbound Key to the Tarot, authored by Art himself, that had gold embossed spine text and an embossed (but with no gold) ouroborous-encircled title on the cover (the later models came with a gold snakey). These were all bound in a rather large “top-lift” red box. What records we have indicates the cards were an instant hit, with several follow-up print runs in four (possibly five) known editions through 1939.

While beautiful to behold, these prototype decks have been reported to have been of inferior quality to that needed for actual use, and these were replaced by the “1910 A decks” in late March the next year. An exact replica of this deck has never been created, but a few companies have conjured up facsimiles over the years, ranging from comically bad to “dangerously close to the original.” Scans of the original decks appear below.

Associated KtT (also seen in the featured image) was printed by William Rider & Sons, Ltd. Unlike the 1910 KtT this first edition had a blind stamped cover instead of a gilt cover stamp. Other than that these books are identical, and bound only a few weeks or months apart. Please click here to see various close ups of this edition of The Key to the Tarot.

On the left is a complete set of web friendly scanned images of the original Waite-Smith decks (4-up). This deck was the prototype, or “proof of concept” deck to be shown and sold at a local art fair. The “Roses and Lilies” background on the back of the decks is unique to this print run. An inferior recreation of this background has been placed on decks by both Lo Scarabeo and U.S. Games Systems. Neither company uses the true original pattern; not that it matters to anyone but historical scholars. While it is fun to pick up a “new” wildly historically inaccurate reproduction deck we would not want you to be fooled by revisionist history. Individual web-friendly scanned images of this deck can be found here. If you need high-resolution scans of this deck for research purposes, or for your university, county, or national museum, please contact us!