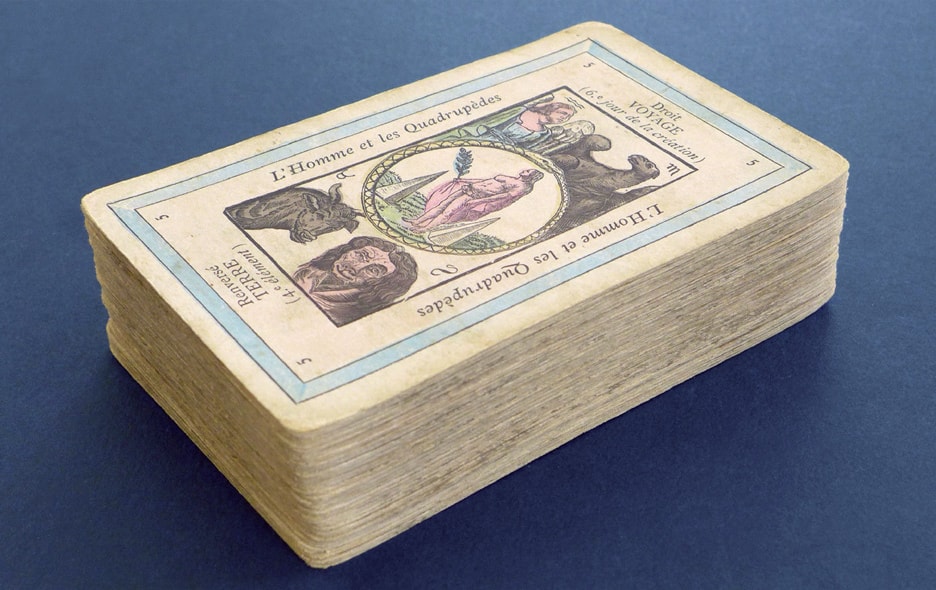 The Etteilla deck was the magnum opus of Jean-Baptiste Alliette, who took on the nom de plume Etteilla (he spelled his name backwards). He is regarded as the first official tarot reader in history, and much has been written on him (links to various articles appear at the bottom of this page). His main contribution to the Waite-Smith deck is his trailblazing brazenness at rewriting the rules. Antoine Court de Gébelin paved the way for Alliette to transition from cartomancer to “tarot reader” a few years previous to the creation of this deck. While both men were ridiculously wrong on any number of metaphysical secrets and history itself, together these two laid the foundation for the tarot revolution in London and are the godfathers of the modern tarot. Their work was regurgitated without question by Levi, and thus Mathers, and even by Waite to an extent, and to this very day their hypotheses form the basis of most modern tarot teaching. Sadly, when it comes to the tarot “expertise” you don’t have to be right in this world—you just have to be prolific, have a fierce monotheistic conviction, and base all of your arguments on “ancient documents” no one but you can see. Others will flock to you on bended knee, twisting the laws of physics to prove you right, and them experts of your methods. Of course it also helps if you were born in the 17 or 1800s. If you can’t do this last part kiddies there is still hope: simply proclaim yourself the defender and interpreter of some “expert” of that era and you will sell a lot of books.

It is from “Etteilla” that Mathers gathered the bulk of his information about the tarot as a spiritual tool, and from Mathers that Waite gleaned much of his information. Waite’s deck idea sprang from several sources, as did Pam’s art for it, but central and paramount were the Marseilles deck variations, the Sola Busca, and this deck. While many images in the Waite-Smith deck closely follow the Marseilles versions of the tarot, those decks were sloppily printed and of little artistic value. This deck gave Art and Pam, quite literally, photo-quality images to source from. Below are two versions of the Etteilla deck, and below that appear comparison examples, with links to more in-depth comparisons.

This version is often referred to as an Etteilla II and it was
published by Z. Limson circa 1840-1890. These cards were
hand-water colored at the time of publication. Each card measures
approximately 5″ by 3 1/8″ (click any image below to enlarge it)

This version is often referred to as an Etteilla III and it was
published in 1890 by B.P. Grimaud in Paris. The colors on
these cards are exquisite for the era. Each card measures
approximately 4 5/8″ by 2 1/2″ (click any image below to enlarge it)

Also, please note that if you need larger images or to physically inspect these decks for research purposes please contact us directly.