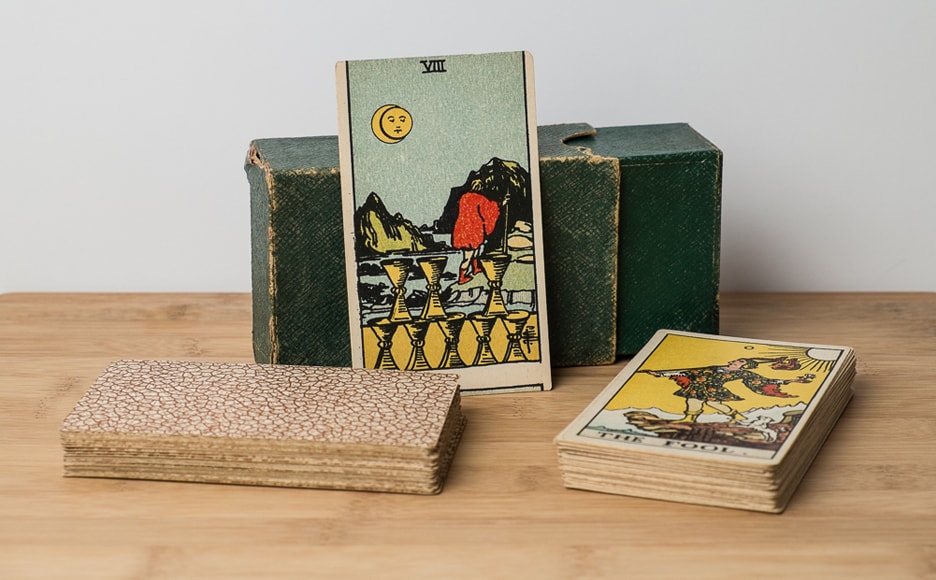 No one really knows where this deck fits in, other than the fact that it seems to be a crude photographic reproduction of the 1909 line art (or taken from the 1911 PKtT), but with the 1910 “cracked mud” card back designs. The color printing on the card faces is akin to the “blobs per inch” (BPI) style used in the “B” and “C” decks, but in every way these (“D decks”) feel like the kind of cheap knock off you would find during wartime, when master and apprentice printers are called away to defend their countries. This could place these decks between 1914 and 1917, or later, during WWII.

Of the few existing decks, a few copies are packaged up with a 1920 Key to the Tarot, and one even came with a 1910 KtT, making some us believe that this deck was originally published between 1915 and 1920. That said, Rider Inc. states their decks were published through 1939, and this may have been the last edition of the decks before they stopped printing tarot cards for the next 32 years. While we are continuing to research the origin of this particular deck, here is some useful info you can use “right now”:

There are a few ways to instantly tell if you have a “D deck” in your hands. First, it is thinner than the “Roses & Lilies” and “A decks,” but thicker than the “B” and “C decks.” More easily spotted however is the inconsistency in the cutting. These cards were either rushed out or produced by drunken laggards late to toss back a pint with their mates at the pub. It’s people like this what cause trouble, and it is a shame that British law at the time did not allow for a good public flogging for such crimes against the common good. But, somehow these decks sold, and still sell for well over $1,000 apiece. The backs of the cards show the same “cracked mud” pattern we see on all of the versions produced after 1909, and the faces of these cards reveal the same line work and stone damage unique to the “A decks.” The telling point, however, is the ribbed feel on the face of each card in the “D deck.” Please see examples here, here, and here. Sometimes diagonal and sometimes horizontal, these ribs mark the specific playing card stock only used in this version of the Rider decks.

Essentially this card is a remake of the original “A deck” but poorly executed. I would like to blame World War II for labor shortages (lack of skilled printers who were off defending Europe from idiots) because that would make the most sense. Unskilled labor produced a shoddy product; end of story. The problem is that we need more to go on, so a trip to London to pester, harass, and in all legal manner extort the (now buried) truth of the matter from those who keep it form the public, assuming such people still exist. Until then we will just have to continue our research here. Stay tuned!

Came with: Large slipcase* or

a KtT in with the full deck of cards.

Associated KtT looks to be the “1920 New Edition” printed by Butler and Tanner in Frome ( not shown in featured image, but you can find them here). It is worth noting that Butler & Tanner were widely known for their exquisite quality so it is unlikely they printed this deck.

These are various “D decks” we hope you will enjoy perusing. These decks use a similar cardstock as the “A,” “B,” and “C decks” but the core is thicker than some and thinner than the others. More than likely the actual playing card stock was manufactured by the same (as of yet unknown) paper company. Even today playing cards come with a variety of cores, which are defined by their colors: blue core, black core, and gray core. Today’s cores are of various thicknesses and stiffness to allow a more customized feel for your cards. The choices back in 19?? were a bit more limited. We can see the core of an “A deck” in this image.

Web-friendly scanned images of this deck can be found here. If you need high-resolution scans of this deck for research purposes, or for your university, county, or national museum, please contact us!