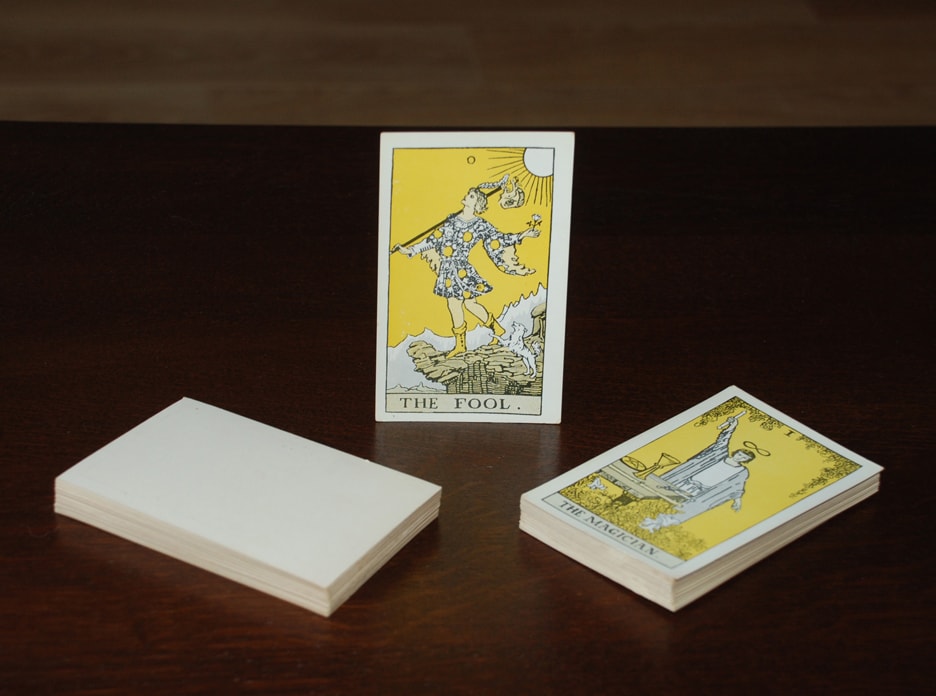 This deck first appeared in 1916, in de Laurence, Scott & co.’s 1916 catalog. A two and a half page advertorial introduced the tarot to Americans, borrowing heavily from Mathers’ 1888 booklet entitled The Tarot, from which several paragraphs appear unaltered, albeit picked up and pasted in place, interspersed with L.W. de Laurence’s own thoughts. This is no different than a rapper “sampling” a music bed from a popular song to lay tracks over, interspersing the melody with their contribution, except that de Laurence did not pay Mathers any royalties. What amuses (read aggravates and frustrates) me is that de Laurence’s clever abuse of copyright law was vilified in his day, but the same actions and worse by tarot companies today are celebrated as genius and unchallenged. What was once considered unquestionably bad taste is now the preferred method of running a tarot-related business. “Hail to the pirate-kings!”

The text of the original advertorial is difficult to read by today’s understanding of the world, but it must have been fascinating back in the day when Americans had no idea there was such a thing as “the tarot.” Here is the original advertorial, photographed from the 1916 catalog in our collection. Please understand that due to the extreme fragility of the pages the physical document is not available for public display except on special occasions. This catalog was printed on bible paper and very few copies of this catalog could have possibly survived to this day. It is my hope that other copies are found.

As to the deck itself, no images grace the 1916 or 1919 catalogs, unlike the awesomeness of display in future catalogs, but it did come with a free book that “spans over 60 pages.” Unfortunately there is currently no known evidence of what that book looked like, but it is referred to as the Kabalistical Key of the Tarot. This mystery book may be an early draft of L.W.’s “version” (exact text republished without permission from Rider, but as their was no declared copyright this may be a moot point) of the PKtT. Given that it says “spans over 60 pages” and says nothing about being illustrated, it may have been a rush job. de Laurence’s PKtT was not received at the U.S. copyright office until December 5th, 1916, so it was completed too late for insertion into the 1916 catalog. The deck itself is referred to simply as “One Complete Pack of Tarot Fortune Telling Cards,” or “Pack of Ancient Egyptian Tarot Cards,” and the ad copy states that it cost several thousand dollars to recreate them to be exact to their original meanings. They are described specifically as “double headed” to mark them as different from anything that came before. This is the same language used to describe them years later in the far more extravagant ad that appeared in later catalogs.

Like the original decks published by Rider, in London six years previous, these simply had no name. They came in a plain white box, which is typical of mail order products, and the cards were printed only on one side (blank backs). They were cut from heavy cardstock with squared corners, hence the term “square yellow” tarot deck. The five oriental colors referred to by L.W. in his advertisements were: were black, half-screen black, or “gray” to add depth and sense of shading, yellow, half-screen yellow or “light yellow,” and the mix of the two half-screens to create an ochre color. Technically this is an accurate description of the card images, if we assume the colors black and yellow to be exclusive to the orient. This was the world that was Chicago in 1916 after all.

This deck appears in his 1916 catalog as order #680 for $3.00, and again in his 1919 catalog as order #697 for $3.50, but this time it is accompanied by The Key to the Tarot—An Illustrated Book. This would be the 1918 edition of his version of The Key to the Tarot. This was a marginally modified version of  first edition, which was copyrighted on November 20th, 1916 (effective  December 4th). I bring this point up specifically because it should mean (I am not a lawyer after all) that the cards were never copyrighted by de Laurence, but the images in his book were, according to the Catalog of Copyright Entries no. 135, printed january 5th 1917. He snuck in right under the wire for inclusion in the 1916 copyright year.

Despite being a blatant copy of Pam’s art, it is an important note (questionable ethics aside) that this was the deck that introduced Americans to the tarot. Due to the Great War (WWI) the early Rider decks never made it to the states in large numbers, despite the existing connections Rider had in the U.S. The Occult Review was published continually through the years simultaneously in the U.S. and England, but for whatever reason (most likely Waite’s dismissal of his own creation) the Rider decks never caught on in the colonies. This deck (in all its forms) however, grew like a weed to become the dominant Waite-Smith deck in America until 1960, when University Books, Inc. relaunched the tarot revolution.

Also worth noting: with the advent of the 1931 catalog the tarot got a huge boost in priority in the de Laurence household. Rocketing from “order # 697” in 1919, all of the way to #20, the tarot became one of the De Laurence co.’s top selling items, and L.W., never being one to ignore talent gave his new creation a giant two-page spread on pages 148 and 149. This was mail order magic: a giant facsimile image of his Oracles Behind the Veil (aka 1918 publication of The Key to the Tarot) dominated page 148 while 21 images of tarot cards danced gaily across the top of page 149 under the headline “THE TAROT” FORTUNE TELLING CARDS. There was even a long-winded testimonial about how great these cards were at the bottom of the page, right above the call to action to get both the cards and the KtT for just $3.50 (Foreign 18s.).

This massive spread was not nearly as big of a send off as other products L.W. presented in his giant catalog of occult goodies (some items meriting 6-7 pages of catalog space), but it was “just enough,” given the whole point of the tarot is the images on the cards. The artwork was still Pam’s, the idea Art’s, and the colors L.W.’s. In many ways this deck was a progenitor of globalization. de Laurence was vilified at the time as “the Yankee Pirate,” but in many ways he was a visionary; importing ideas from England to distribute to the United States and the world—albeit without consultation with or consideration for the rightful owners of “his creations.” According to Harvard Law, a strange loophole in the U.S. copyright law at the time is to blame for his pulling off this heist of intellectual property.

Came with: White box and either
“60-page book” or later L.W.’s IKtT

On the left we have the original ads for the first edition de laurence deck, and solo and comparison shots of this deck to his other decks over the years. Rather than strain your eyes, come see our web-friendly scanned images of this deck here. If you need high-resolution scans of this deck for research purposes, or for your university, county, or national museum, please contact us!