This was a company ten years ahead of its time. By 1959 they were in full swing, printing a vast array of new age classics and their iconic tarot decks over a decade before Rider & Co. reentered the market and U.S. Games and got in the business of selling tarot cards. Little is known about this company anymore, but their presence can be felt across the world, from America to Europe, where their revolutionary tarot art art has been blatantly used by several companies (some of whom survive to this day), and their decks continue to sell on almost every continent (we don’t think penguins have much use for tarot cards). This company is sorely missed, but in some ways they never died. Read on to find out how, and why.

1959: America was conservative and “square.” The summer of love could not be imagined in the family values era of post-war suburban enclaves all across the country. The Cold War was raging, with Fidel Castro taking power in Cuba and American media going insane about it. The country was awash in patriotic propaganda. Alaska and Hawaii became states, and the Beatles (the clean cut version) were two years from their first studio album. “The tarot” was that thing from London your mom liked as a teenager (if at all) or some old Egyptian thing from European Gypsies.

Without any warning University Books unveiled the world’s first true reprints of the Waite-Smith deck. The colors were updated, but remained consistent and faithful, with new printing technologies making everything bright and vibrant. Pink backed cards with ankhs in purple rectangles and maroon slipcases started showing up in stores everywhere, which is funny in a way, as the original Rider decks came in either slipcases or maroon boxes, but never maroon slipcases. These new tarot cards were psychedelic and forward-thinking to the 1950’s generation. They ushered in the flower power era of the ’60’s and as the hippy movement spread so did University Books’ tarot decks and books; all across the country. These cards were wildly popular and we can tell the different print runs from the drastic changes in colors, quality and boxes they used (please see the galleries below). 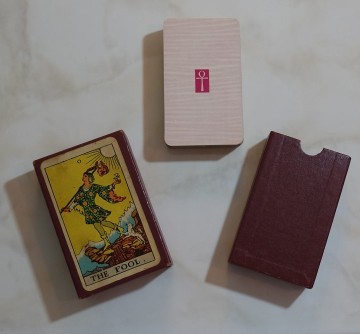 Click here to see all of University Books, Inc.’s decks

This is one of those rare confluences of art and culture that can only come from genius meeting good timing. The people at University Books, Inc. were visionaries, and they picked up the ball so conveniently dropped a few decades earlier and made America’s first true tarot deck. But they did so much more. No one previously had thought to include full color images in the instruction book that came with a pack of tarot cards, as the cost of such a thing seemed ridiculous. That didn’t stop our friends at UB, and they printed, sold out, and reprinted and sold out again, before they finally changed from color plates to grayscale in their instruction books (their version of Rider’s Pictorial Key to the Tarot). Then they printed again and still sold decks and books.

Just the part in our story where University Books, Inc. seems unstoppable something mysterious happens and University Books disappears into the Bermuda Triangle (a popular conspiracy location in the 1960’s). The official address of University Books, Inc. before they moved to New Hyde Park is 101 West 31 St., New York 1, N.Y. Note the one digit city code (a precursor to the modern zip code). This address appears on cards included with some decks whose boxes were already stamped with their New Hyde Park address. This could well get confusing very quickly, so here is a handy timeline of essential events to help:

Okay, so where does this all lead us? Back to New York City, where Merrimack’s address was listed as the same address as University books, Inc. Perhaps there was a divorce, or a breakup in the partnership, or a parting of ways where the printing plates were used by various people. But over time the quality of UB’s decks declined, even as others took over publishing. I will continue to unravel this Scooby Doo mystery, but in the meantime you may enjoy comparing the various University Books, Inc.’s decks to their legacy. Truly, this was an iconic company founded by visionaries. We could use more of these clear-sited visionaries in the tarot world today.