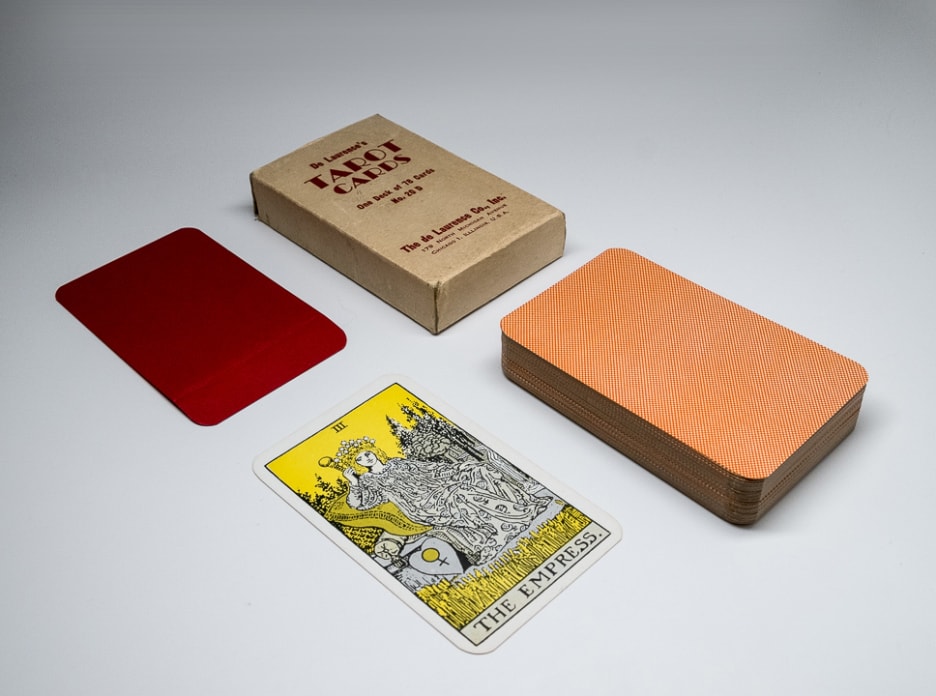 Now we see Velo de Laurence’s primary contribution to the history of the tarot in America. In addition to greatly expanding and tightening up L.W.’s catalog of occult merchandise Velo reprinted his father’s now infamous “yellow deck” on modern playing card stock, professionally printed and cut (quite possibly by the USPCC of Cincinnati, just down the road). These were quite possibly the first “plastic-coated” tarot cards in the world. “Plastic-coated” was a badge of honor in American playing cards before the arrival of USPCC’s “air cushion finish” term reserved for it’s top-tier product. If only these had been properly printed in the widely available at the time four-color printing process these would have usurped University Books, Inc. by almost twenty years.

We know that these cards could not have been printed before late 1943 because of the postal zone code printed on each box (“Chicago 1”). This system was in use for twenty years before the modern five-digit zip code took over. This gives us up to a twenty year time span that these cards could have been printed, but the addresses on the “orange” deck also include “179 North Michigan Ave.” When we pair this up with other known records of the de Laurence Company we can winnow down the timeframe when the “round yellow” deck (this version) was printed. L.W. never lived to see his creation (the yellow deck) transition from a novelty item into a serious force to be reckoned with in the American market. L.W. never saw this deck. He passed on in 1935; this deck came out in late 1943 or 1944, or sometime later. This deck, and the “orange” and the “red” is all Velo.

The key to the enduring sales of the de Laurence decks was a simple matter of mail order physics: you can’t see the actual product unless there is a photograph of it. “Artist renderings” don’t count. People bought de Laurence’s (yellow, orange, and later red versions) cards constantly throughout the 1940’s through 1980’s, and this is what they got. The D on each box of de Laurence cards stands for “deck.” Order #20 was listed as a book and deck, but you were always able to buy just the deck if you specified “order #20D.” The term “20K,” or “20B” never appeared anywhere in the accompanying book however. For those of you looking to buy a yellow de Laurence deck, it is important to know that no “square yellow” deck has any printing on the box. Also, all “round yellow” decks were printed when the de Laurence Company was at 179 North Michigan Avenue. If the address is on the box is different, it is either an “orange” or a “red” deck. Also, the first run of “orange” decks were printed at 179 North Michigan, so always make sure that you see what’s inside the box before parting with your cash.

Here are a few images from different collectors. Some previous deck owners took their studies extremely seriously and carefully wrote their observations on their cards. It is important to realize that extremely intelligent people have always been interested in the tarot as a possible additional portal for information to supplement their own vast knowledge.