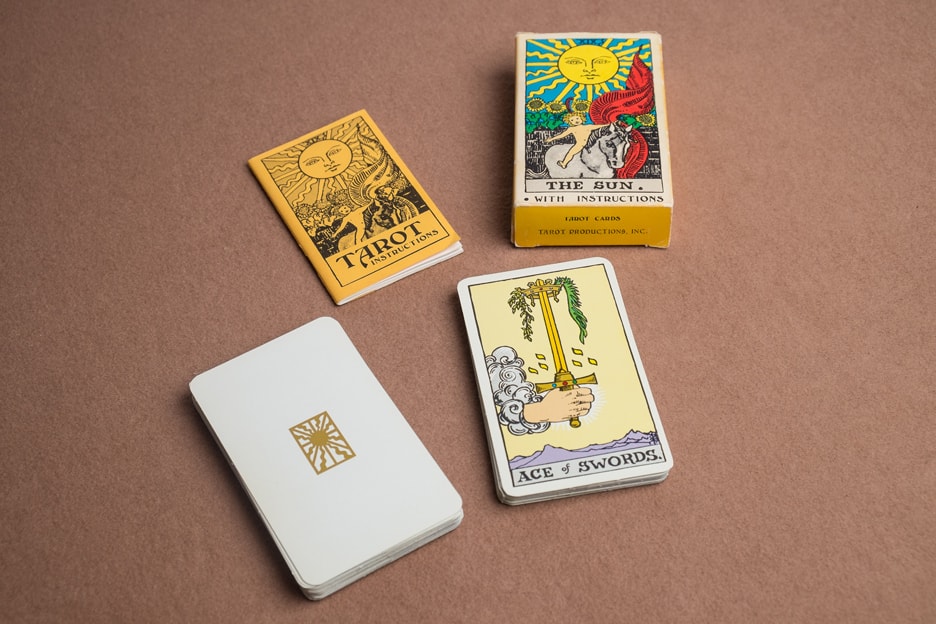 Frankie Albano, like the original (black) line art done by Pam, is an enigma. We know that both existed, and we have evidentiary proof of this. We have the results of their being here, but not either one of these things left any direct indication of their passing this way, or where they got off to. Anyone who knows where they are is silent as death on this matter. But here is what we do know about Frankie Albano, his company, his tarot decks, and even his various tarot deck boxes, and that is more than enough to waste a lazy sunny afternoon on.

In 1959 University Books, Inc. created a full color tarot deck to accompany its (first ever) full color publication of The Pictorial Key to the Tarot. They obviously had one of the old Rider decks from London because they were able to match the colors. More than that however they established the colors of the tarot because they were the first to print decks in color in America, using the modern processes available in 1959 in New York City (the most technologically advanced city in the world at the time). Their only possible reference for colors was a physical copy of the old Rider decks, which they used to base their art and color on. But obviously they got it all wrong which is why Frankie Albano had to re-color the cards with “accurate color tones” (see below for what that means). The year was 1968 when Frankie (he let’s me call him that in our weekly poker games) revealed his “re-colored” deck to the buying public. The hippie movement was in full swing and he was as much a product of it as a card-carrying member (oh the stories he tells . . .). One year previous Frankie had published his tarot wheel, which was an interesting—and unique Ouija board of sorts. These are rather rare and all but impossible to come by with the original planchette. Fortunately I have magical voodoo powers (and amazing persistence) and I was able to summon up an original Albano tarot wheel in minty-fresh condition, with a planchette. The only thing that is missing is the original box, so if you happen to have one please send pix!

. . . And all of this brings us to the deck, and back to 1968. Frankie had previously established “Tarot Productions” at 8006 Melrose Ave, in the lower “Hollywood” area of Los Angeles for the express purpose of publishing and distributing “metaphysically correct” divinatory art. Frankie was just down the street from BOTA, and may have even been a member for a time, but his tarot wheel and deck remain true in concept and form to the Waite-Smith ideology, which implies a firm rejection of PFC’s manufactured Kabbalah-intensive tarot. The colors on his (1967) tarot wheel by the way were lifted directly from either an original Rider or a University Books deck. It is only in 1968 that he felt the need to correct the colors of the tarot once and for all. Frankie decided that the colors William Rider & Co. used to color Waite’s deck (and Pam’s art) were wrong on so many levels. Whether he ever had possession of an original Rider deck we will never know, but it is blatantly obvious that he did have one or several of University Books, Inc.’s decks.

We know this because Frankie blatantly copied their LWB (UB invented the “Little White Booklet”) and only changed the trump card on the cover and the color of the paper cover from white to ivory, and later to goldenrod. This mars the legacy of Frankie, but in a sense it makes him the godfather of copying LWB’s, as other tarot card manufacturers copied his LWB, or also stole from UB directly. Frank had an interesting point however. By Waite’s time, the four classical elements of ancient science (now the four states of matter in modern physics) were tied to four of the five suits of the tarot. Fire, Earth, Air, and Water were now permanently infused psychologically with the tarot cards as divination and manifestation tools. To Albano (Frank R.) this meant that the dominant colors of each suit should reflect the elemental properties therein. This made the deck annoying aesthetically but far superior for use by neo-pagans than the wildly popular University Books, Inc. edition, and later the re-released Rider (of London) and USGS decks (of New York) that flooded the market. This new coloration was carefully thought out by someone with an artistic eye and a metaphysical mind. It was simply “an improvement” to an old standard (the Waite-Smith images from 1909).

Given that Frankie did not invent much when it comes to the tarot it is important to point out some historically pertinent facts of what (his company) Tarot Productions did bring to the market. Here are a few points every tarot student should know:

* Unless Merrimack Publishing split from University Books, Inc. and also invented “The World’s Tiniest Deck” before 1968/1969.

*** “For public use.” PFC did have a 22-card “color-it-yourself” uncut sheet of cards as part of its early lessons long before they finally came out with a boxed edition.

**** University Books, Inc. invented the prototype cardboard “tuck box” that Tarot Productions copied and changed the pink to yellow, which became the standard yellow box used by other companies. Rider (in 1971) resolutely insisted on using a blue box, which may have been their downfall.

So, in many ways “Frankie” was a pioneer, or was he a plagiarist? Until we can track him down we will never know. I like to think of him as a creative, metaphysically adept businessman who vanished into the ether like Buddha; just slipping into another plane when no one was paying attention. Then again, he might have just opened up a pizza shop a few blocks down Melrose with Anthony, but that is a likely coincidence that has to be investigated. In the meantime, here are the images of his full and complete deck. You can also find all of his decks here on one page. Or, click here to go directly to see the many variations of Tarot Productions, Inc.’s yellow deck boxes. This is a rare view into the mind of Frankie Albano. We can see his central theme constantly being adjusted to match all needs for all people who would purchase his deck. Unlike other modern tarot card manufacturers he did not produce a one-size-fits-all stock deck and force people to buy it “as is.” In this way Frankie is the godfather of the schizophrenic way decks appear with seemingly endless micro-variations these days in an attempt to please every possible consumer while maintaining the core brand (“Buy from us! We have 13 flavors of vanilla for you to choose from!”). Genius or plagiarist, Frank R. Albano saw the future in ways few other tarot artists and card manufacturers could. It is for this he is a core and necessary part of the history of the second wave of the modern tarot revolution.

Came with: ivory or goldenrod
LWB lifted from UB

On the left are images of the “Accurate Color Tone” decks and the “de Luxe” color editions. The “Accurate Color Tone” edition is thought to be the first series, replaced by the “de Luxe” edition in later print runs. I have found no noticeable differences except that the de Luxe edition seems to be a bit less color saturated.  What I find most revealing are the numerous changes made to the boxes, which in turn help us establish an order of production. Until we can find Frankie, or someone who worked at Tarot Productions, speculating is the best we can accomplish.