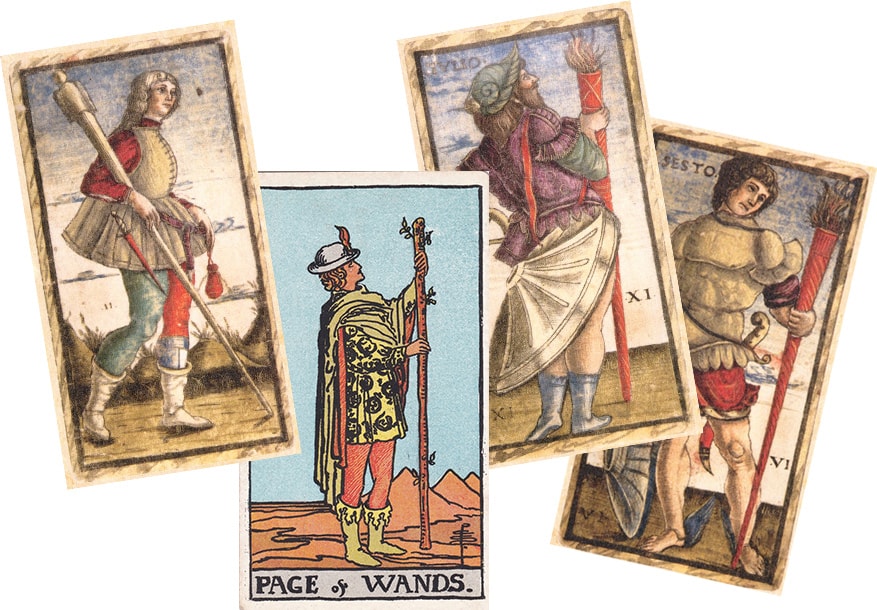 The Sola Busca deck is regarded as the first and only fully (scene) illustrated tarot deck prior to the December 10th, 1909 appearance of the Waite-Smith deck. Created in 1491 it existed centuries before any of the Marseilles’ variations, which exploded in popularity and became the standard tarot of most of Europe and even England. Several of the images from the Sola Busca deck are eerily similar to the Waite-Smith release. While we are working on a giant timeline of image creation and alteration (a master graphic of when each tarot image image first appeared—to the best of our knowledge) here are a few interesting comparisons to help you see how and where ideas come from, and thus how and where interpretations of ideas (e.g. “traditional tarot meanings derived from the images on the cards”) have come down to us. In divinatory tarot “art changes the meaning of the card,” as each new artist changes the images to suit their world view, and their artistic skill and style. The art in the tarot is fluid, as artists and designers morph the overall system to meet their needs and desires. The most standardized systems are the Marseilles and Waite-Smith currently, with oracle decks (non “tarot-system-exact” divination decks) trying to upset the apple cart every year.  Below are images comparing various cards from the SB and WS decks.

NOTE: The purpose of this table of images is not to show direct causality but instead to show similarities. Tarot images were somewhat standardized by the time that Pixie drew Art’s cards in 1909, but this was after hundreds of years of various artists trying out new things in tarot and “tarot-like” decks. While it is possible to see exact similarities in some cards, other cards seem to borrow from various sources, notably “unrelated cards.” It is impossible to track down every source reference of the images Pam drew, but we can tell by inference from where she derive most of her ideas thanks to the existence of older decks and masterpieces of art. 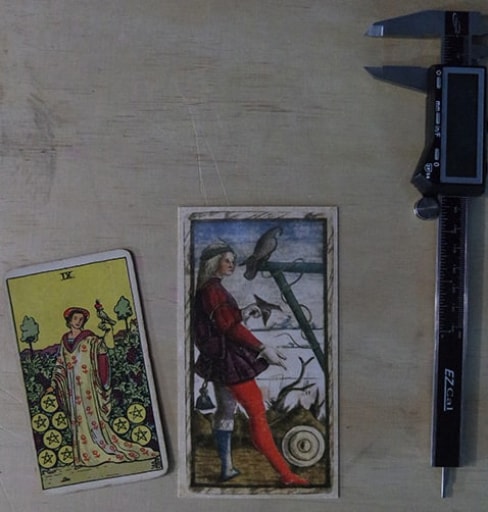 The WS 9 of Coins seemingly draws from the SB Page of Shields love of falconry. 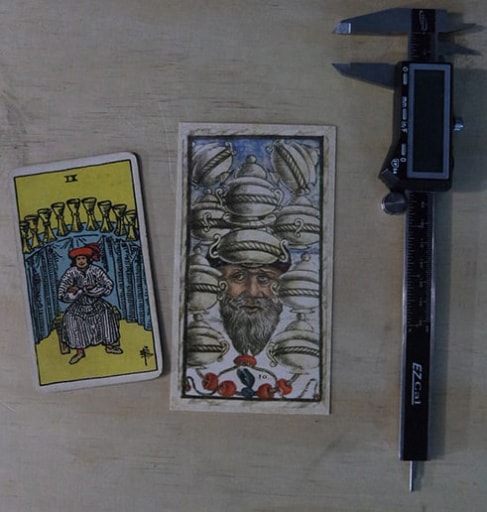 While the image itself has changed completely, the primary parts exist with the focus on the head/mind. 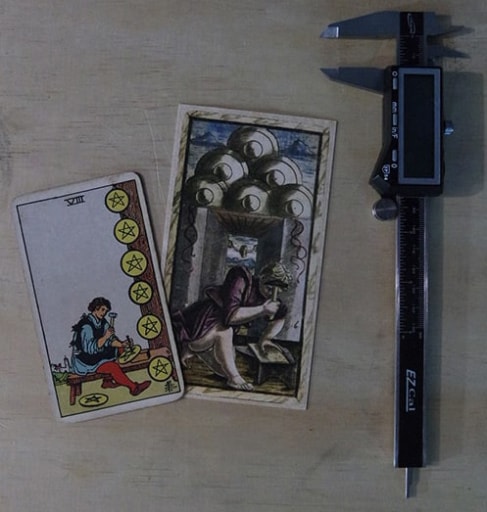 Here the WS 8 of Coins uses the exact scene from the SB 6 of Shields for its (new) visual interpretation. 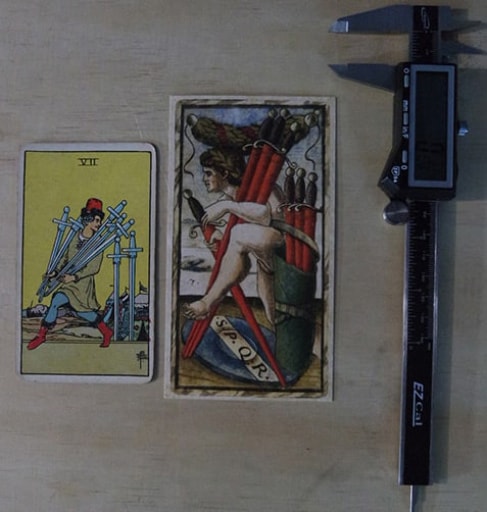 Not a lot to say here. Considering Pam had to sketch these images at the museum, or later from memory, she did pretty well. 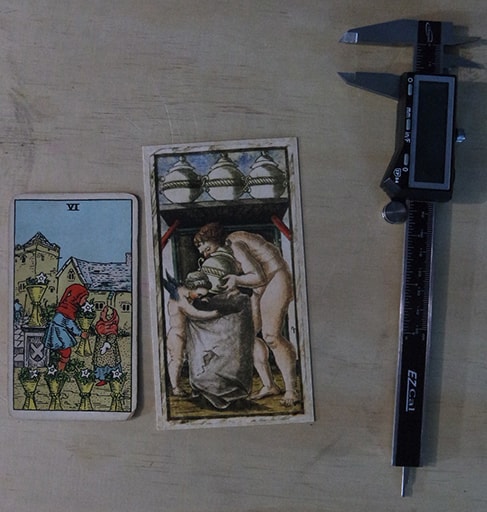 Pam’s 6 of Cups bears close resemblance to the SB 4 of Cups. No other SB card has this interactive symbolism. 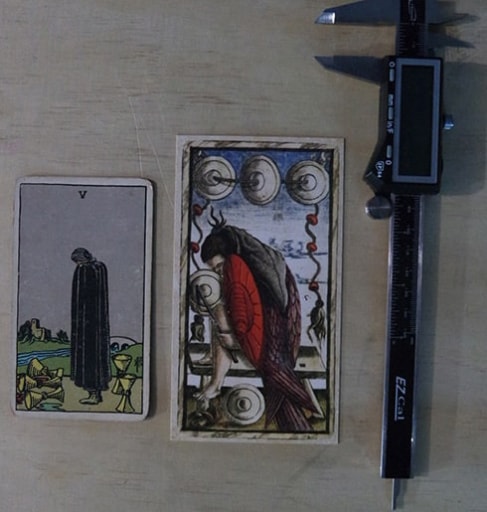 This is an interesting visual similarity. In the WS it appears on the 5 of Cups, but in the SB it shows on the 5 of Shields 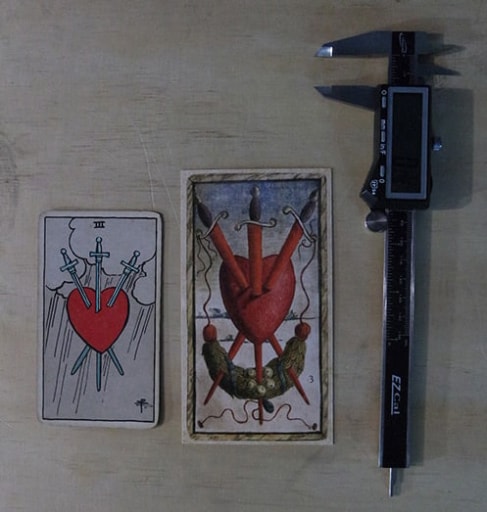 While a few SB images utilized the “crossed swords/wands” visual (in the 3 of Wands they pierce a head) this is where Pam got her “pierced heart” idea. 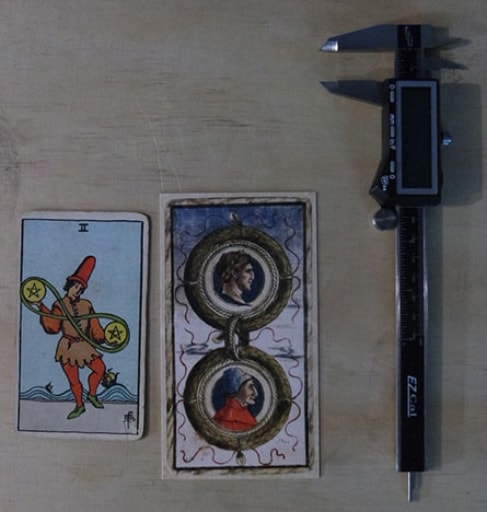 This looks to be more influence than direct causality. Still, it is interesting to examine and ponder over. Note how on the SB, this is the only image to host a portrait, and the only “Shield” suit card of its kind. 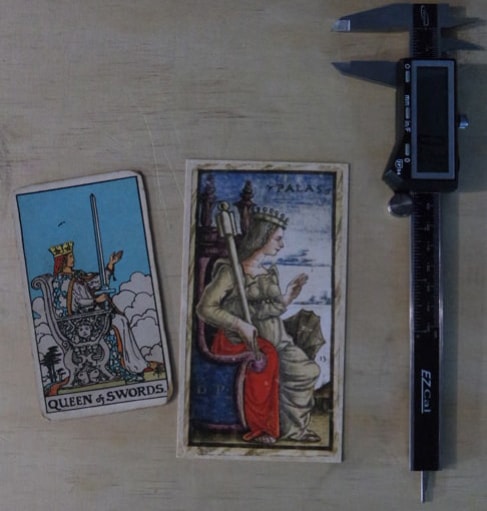 This SB Queen of Wands has the same pose as the Visconti-Sforza Queen of Swords (which gave us the WS QoS). 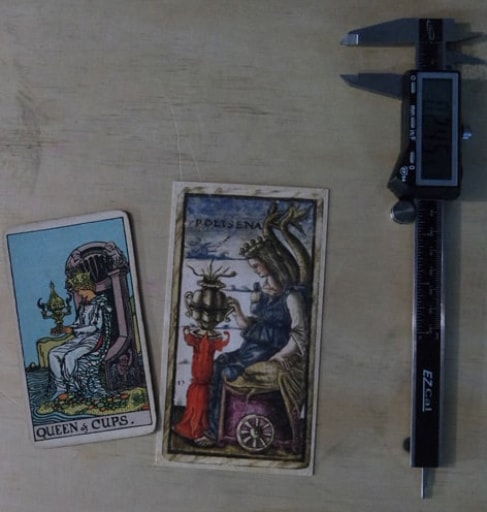 This poor Queen of Cups has been staring at that crazy looking cup since 1491! 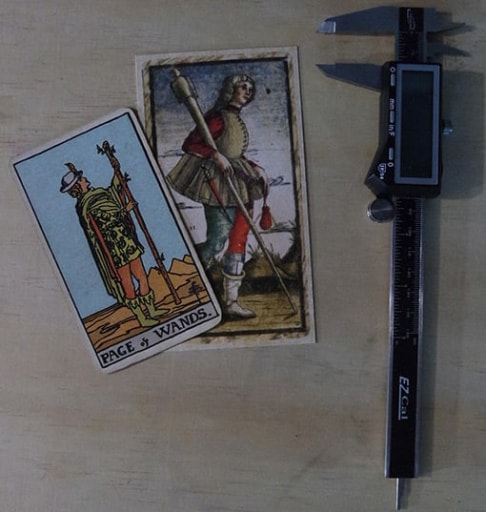 SB Page of Wands vs. the WS Page of Wands. I find that other cards are more similar (please see featured image at top of this page). 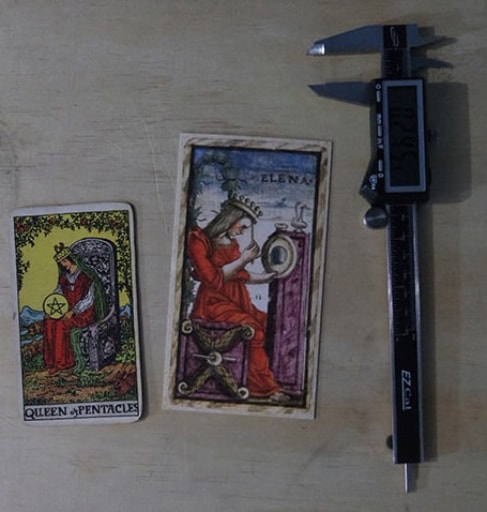 Say what you will about the missing bunny, both Queens are contemplating their (coin / shield) with their heads bowed and wearing red. Nether is paying any attention to us. 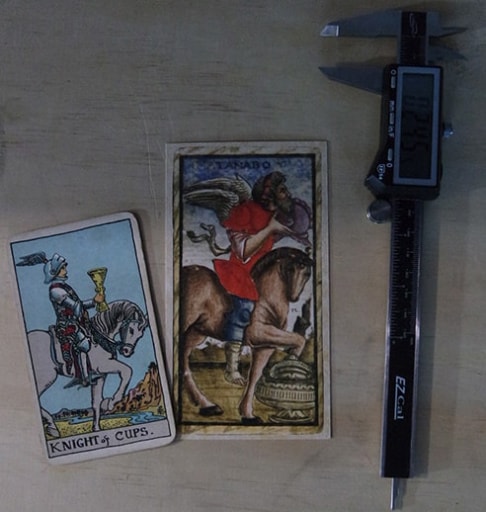 Right down to the gait of the horse. And the wings, barrier on the left, holding something above the horse’s head . . . 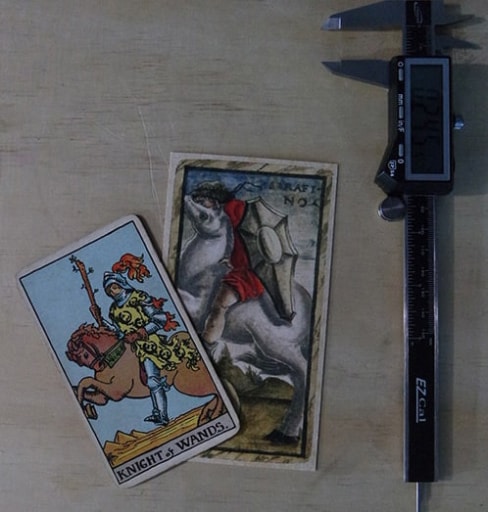 Here we have similar framing and posing in unrelated images once again. Coincidence? Who can say at this point, but it is food for thought. 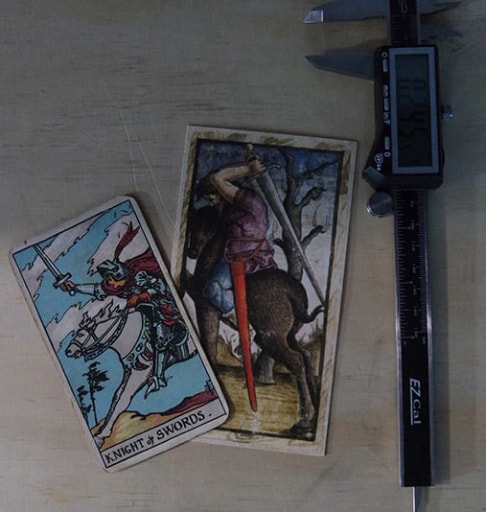 Different sword angles but eerily similar visual statement: you are about to get run over and hacked to pieces (also both facing left). 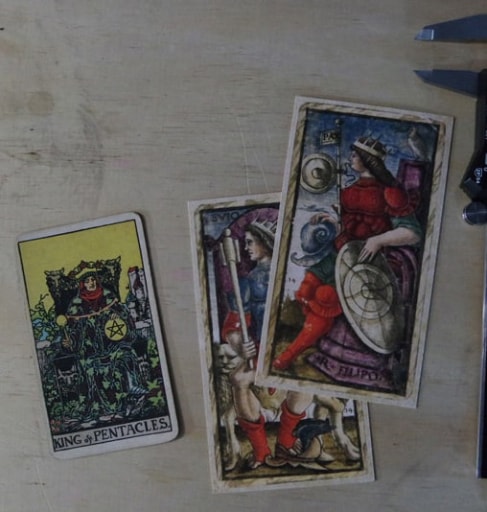 I don’t see a direct correlation between the Coins/Shields kings, but that SB King of Wands is definitely resting his foot on someone and has an erect scepter. (Oh my!) 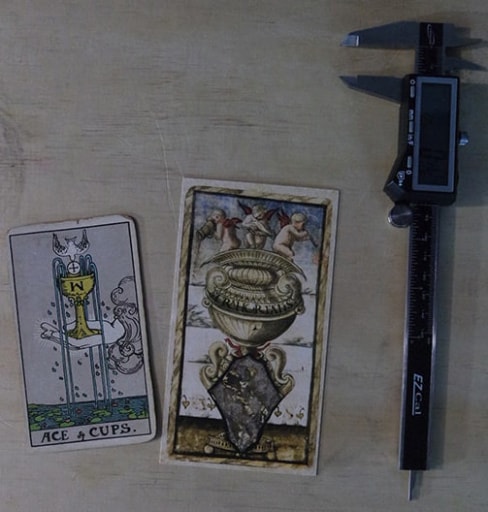 Cherubs and doves. Waite is said to have been more responsible for the Aces, but even so the Christian religious overtones of purity remain the same over 400 years. 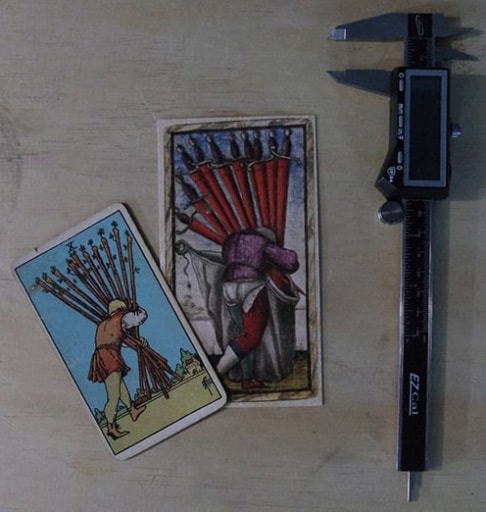 Many Wands cards have men hunched over carrying a load, but it is the SB 10 of Swords that spawned the exact image for the WS 10 of Wands.