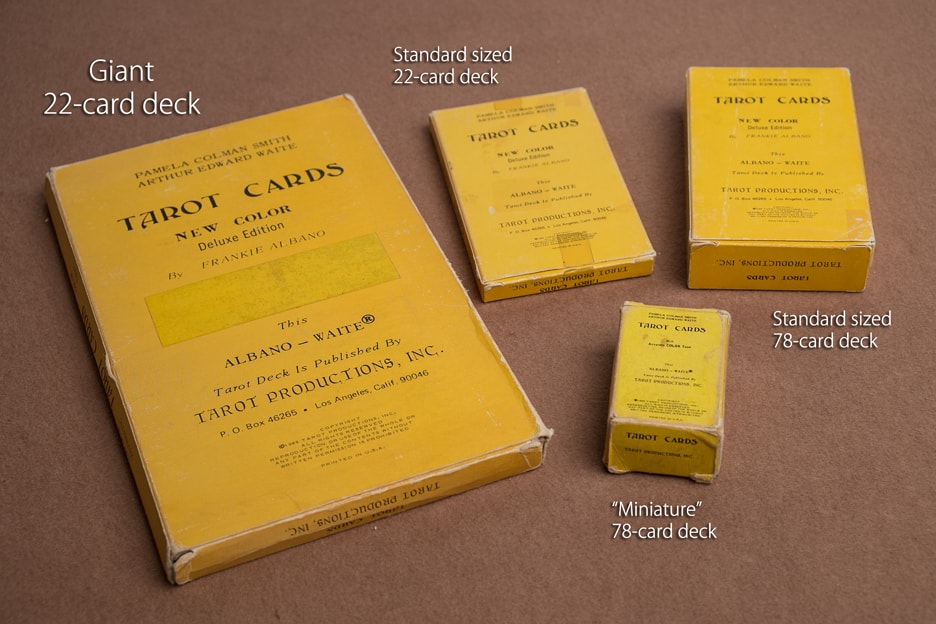 Tarot Productions, Inc. (aka Frankie Albano et. cie) created and published one (and only one) tarot deck in a variety of sizes and boxes. Frank’s passion was the correction of University Book’s (and essentially Art’s—or Pam’s) color scheme. One deck was created in various sizes and formats to best distribute this new vision of the tarot: “a correct one.” Then these various sizes and formats were printed in an “Accurate Color Tone” and later a “New Color Deluxe Edition.” This necessitated various boxes. While they all look the same for the most part, it is small details on the front, backs, and flaps of the boxes that help us determine which boxes came earlier or later than others, and thus decipher the order Tarot Productions, Inc. published their decks.

To find out what decks, and boxes, were printed in what order we have had to enlist the aid of collectors and researchers all over the world, and do some old fashioned detective work on Frankie Albano and tarot Productions, Inc. A more thorough search of old business records in Hollywood California might help, but what has been most enlightening are the various addresses on the boxes and years of hands-on experience in cottage industry retail, manufacturing, and design. There are certain “facts of life” at this level of enterprise that corporations and consumers never have to encounter, and thus never understand. Piecing this puzzle together armed with this knowledge helps our research team create a most-likely case scenario. If we get better intel we will update our findings here. Until then, this is what we know:

The term “Tarot Press” is found on an anti-war poster made in Hollywood (at 716 N. Fairfax, just a block north of Melrose) in 1967, and in the instruction booklet for Frankie Albano’s Tarot Wheel which was also made in 1967, even though the booklet gives a date of January 30th, 1968. This gives us the oldest known address and gives argument that the original name of Frankie’s business was “Tarot Press.” The switch to “Tarot Productions” seems to occur in the 1967/1968 area, with both operations running simultaneously, or one business going by both names before Frankie incorporated and gave the whole thing the name “Tarot Productions, Inc.”

The first run by all accounts appears to be the “Accurate Color Tone” version of the standard sized deck with the address 8006 Melrose Ave., Los Angeles, Cal. 90046. Note the term “Cal” for California. When I was growing up in Los Angeles (circa 1968 onward) it was always confusing whether we were supposed to use “Cal.” or “Calif.” Eventually the state settled on “Ca.” or “CA,” but that was years later. In later deck printings the boxes will say “Calif.”

Two other things stand out on this box. The front (with the image of The Sun on the cover) has no words printed on it other than those found in the card itself. In later decks this will change. The other anomaly is that the top flap is printed upside down. If the deck is laying face up the words on the top flap are face up. This also means that if the deck is standing up on a shelf, facing out (in a store for example), the words on the top flap are “upside down” to the customer. This changes in all other decks. This leads me to believe that this “Accurate Color tone” version of the regular sized deck was the first appearance of Albano’s vision of the tarot. This deck came with an “ivory”, or “beige,” covered LWB. Later editions would have the goldenrod cover.

This brings up my years (of experience) in design and manufacturing. You don’t run (print die cut, separate, stack, glue together, fold, and stuff) packaging boxes for your product ten at a time, or even a hundred at a time. You do them a thousand at a time, and if you want to seriously cut your manufacturing costs you run five or ten thousand at a time. The cost of printing just 5,000 boxes is almost the same as printing 2,000, because of the massive price discounts you get in volume. Boxes are a specialty item that requires accurate color registration and precise die cutting. “This ain’t cheap folks,” even if you (or Frankie) farm out the printing to companies that specialize in playing cards and boxes. Your deck has a specific thickness (unlike generic playing cards), and you also have to take into account the thickness of the LWB. So, the rrrrreallly short version of this nerdy analysis goes like this: Frankie had to run at least 500 to 1,000 boxes per design, at an absolute minimum, if he ever expected to escape the red and find his way into the black. This goes for decks as well. With these (savagely conservative) numbers we can see that this shows several print runs over the course of a few years, showing that “not every deck came out in 1968.”

So, where were we?

The first “Albano — Waite®” “Miniature Tarot Cards®” (with “Accurate Color Tone”) did not list an address, but the later (“New Color Deluxe edition”) deck did. That deck listed an address of P.O. Box 46265, Los Angeles, Calif. 90046. This address would appear on all subsequent boxes.

One caveat that could usurp the idea that the first “deck” address was at 8006 Melrose is a deck that sold on Etsy in 2015 with no address printed on the box (just like the first run of the miniature cards), but has a gold address label sticker that reads “Tarot Productions, Inc. 579 North Vermont Avenue Los Angeles, Calif. 90004. The problem with that address is that it simply no longer exists (it is currently a bush). So, what if this was the second address (Tarot Press on Fairfax being the first), and then 8006 Melrose, and then the P.O. Box? It is enough to make your head spin.

All of the future decks are labeled “New Color Deluxe Edition,” and have the P.O. Box address on them. Other than the “Miniature Tarot Cards®” each box now has a caption telling you what is inside the box. This is especially helpful when buying a deck on eBay, as you can tell that this is a later printing. The standard deck now says “* With Instructions” unless it has no LWB, in which case the back cover will have the words “THIS BOX DOES NOT INCLUDE INSTRUCTIONS” (in caps of course). Other boxes will have the words “THIS BOX INCLUDES FULLY ILLUSTRATED INSTRUCTION BOOK” on the back, and still others will not have any words on the back at all indicating whether or not your deck comes with a toy surprise. It gets confusing, so there are pictures below. The current hypothesis for “the order of the Albano product addresses” are (all in Hollywood by the way):