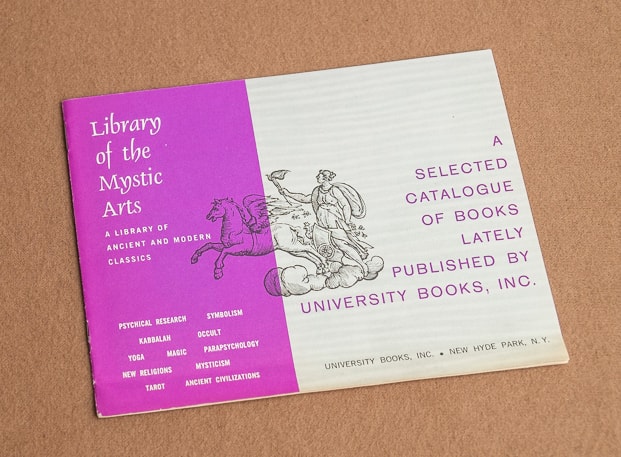 This catalog, entitled Library of the Mystic Arts, sums up University Books, Inc.’s focus on new age awareness before the term “New Age” was commonplace (even though Blake used it way back in 1809). We know the date of this catalog as it has the New Hyde Park address, but also that it appeared with a 1960 University Books, Inc. Pictorial Key to the Tarot. University Books moved to from downtown New York City to the village of New Hyde Park on Long Island just after printing the first batch of their PKtTs and their infamous tarot decks. A gallery of images of the entire catalog appears below.

While quality books on witchcraft were impossible to find (in the late ’50’s), books on Christian magic, ceremonial magic, alchemy, (alleged) Egyptian magic, astrology, and the tarot literally flew off of the shelves in some stores faster than booksellers could stock them. The time was ripe for a mail order company to provide lessons and instructional materials discretely to your door, with your neighbors none-the-wiser. Many companies sought to fill this void, but in the late 1950’s and early 1960’s University Books, Inc. was top dog. While nowhere near as prolific in their offerings as Sears & Roebuck, or de Laurence & Scott, University Books’ catalog honed in on exactly what they thought you would want “today,” and changed their listings to match demand. More on this fascinating company  and their profound contribution to the modern tarot can be found here. One small point of note that may slip past most people skimming through these pages is a mystery that appears on page 3 of the catalog above. Look closely at the cover of their Pictorial Key to the Tarot. No such animal exists. That image is a mock-up only version. The review and early copies came with the now-standard red and white covers. Still, one can hope that we will one day uncover that dustjacket.

One other quaint tidbit of historical trivia to to note: There is no zip-code anywhere on this catalog. Before their move to NHP, UB listed their address in NYC with a one-digit postal zone code. As New Hyde Park was (then and is in essence still) a village, they did not need to be assigned a postal zone code previous to the formal institution of a zip code. This helps us more accurately place the timing of UB’s move to NHP. Calls to NHP’s city hall have failed to turn up any records of when they opened up shop or left town for New Jersey.